This is not an easy task given the recent changes to meeting the character requirement:

The Applicant came to Immigration Solutions Lawyers (ISL) seeking assistance with lodging a Citizenship Application. The Australian Government being granted Australian Citizenship is a privilege and not a right. When a person applies for Australian Citizenship, they must also show the Department of Immigration and Border Protection that they are of ‘good character’. The term good character is not defined in Australia Legislation. However, there is case law which supports how the term should be interpreted.

His Honour Justice Lee at 431:

“Unless the terms of the Act and regulations require some other meaning be applied, the words “good character” should be taken to be used in their ordinary sense, namely, a reference to the enduring moral qualities of a person, and not the good standing, fame or repute of that person in the community. The former is an objective assessment apt to be proved as a fact while the latter is a review of subjective public opinion…A person who has been convicted of a serious crime and thereafter held in contempt in the community, nonetheless may show that he or she has reformed and is of good character…Conversely, a person of good repute may be shown by objective assessment to be a person of bad character.”

Throughout this year, non-citizens who have applied for Australian Citizenship are receiving requisitions from the Department in relation to their “character” for incidents which may seem like a simple driving offence on their Driving Record with the relevant States and Territories in Australia.

In reviewing the Applicant’s immigration and character history, it became apparent that the Applicant had been charged with a mid-range drink driving offence. The Merits Review Stream of Lawyers and Migration Agents pre-empted that this offence could trigger a requisition or refusal from the Department of Immigration and Border Protection (DIBP). Therefore, the Lawyers were pro-active in preparing comprehensive and detailed submissions to mitigate the Applicant’s character. As a result of the lateral thinking and multifaceted approach of the ISL team, the Applicant was successful in obtaining a Citizenship grant.

It is imperative that in seeking to apply for Australian Citizenship, you receive the correct Migration advice and assistance. ISL is one of the leading immigration law firms in Australia and is headed by Managing Director and Principal Lawyer Anne O’Donoghue, who has over 22 years of experience. ISL are very proud of our high success rate and always endeavour to achieve the best possible outcomes for all of our clients, albeit how complicated the matter may be. 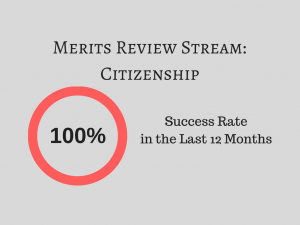